Since the previous week was a bit different in my schedule, I ended up with a rest day on Sunday, though for me, rest certainly is not sitting on the couch all day. About middle of the day, Gabe, Shael and I were all feeling restless, and it was time to go. As a parent, I’m getting better and better a predicting such times – times when the walls are beginning to close in, and I can see the indicators of the downward spiral starting to form. So, it was time to leave. With a slight bit of prodding, the boys put on socks and sh0es and we were off. I did not know where we were going at first; I just knew it was somewhere. I headed west and asked the boys if they wanted to check out Long Leaf Pine Preserve or Deep Creek Preserve. They both, independently I’ll add, said Deep Creek.

The preserve is so new that it is still difficult to find on the web. If you search Volusia County and Deep Creek Preserve, you should be able to find the address. It is near Lake Ashby on west side of 415. The preserve has a 6.5-mile hike/bike/equestrian loop, but we did not last long on the loop, as the first part was all access road. Don’t get me wrong, it is a beautiful area, and I plan to check out the rest on my bike, but they boys needed something more. As we were strolling about and exploring tortoise holes, we found some old ribbon markings that led off into the woods and decided to see were they led. We followed one path out to an old, oddly rigged deer stand and followed another color out deep in the woods and back around to the deer stand. It was quite the trek in the woods. Once back to the access road, the boys were done, and it was time for some water and home for lunch.

A Solid Week of Training
Monday, 28 Jan.
I cracked the morning early, as I normally do and headed straight for Martin’s Dairy to start the week with a run. I ran the full blue loop – just under 7 miles in a little over an hour. I haven’t run much out there in the dark with a headlamp, so I began at quite a slow pace. Running in the woods in the dark is definitely a different kind of experience. The deep quiet allowed for all kinds of sights and sounds to find me. The air moves differently and the headlamp illuminates the forest is strange ways. I tend to find at least one moment of startle during a run, but that depends heavily on where the hogs are rooting. The run, though slow to start, went well. Throughout, I took it easy on the switch backs to avoid injury in the low light, and as the light began to shine on the trails I starting feeling stronger and more confident and really hammered the Kaye Paul loop, which is around .8 miles. The interval helped me set the tone for the week.
Note: The Compromise Trail makes the new loop much harder on bike and on foot, but especially on foot, at least for me. 7/10 (RIP) was an all-out speed finish. Compromise is not.

Tuesday, 29 Jan.
Creaky knees welcomed me to the day. I am back experimenting with shoes, and though I love my New Balance Minimus 10s, they are quite hard on my body. Creaks and all, I started the day with a long zone 1 bike ride with my dog, Lily, and I hit the gym for 45+minutes. Yeah! I admit it was light to medium – I did not want push my chest and elbow – but I did all groups with core emphasis, a 10-minute bike warm-up and short bike cool down. Somewhat liberating after a long time recovering.

Wednesday, 30 Jan.
After a light day on Tuesday, I woke to an anticipated long bike. I planned on around 20 miles from home and through Martin’s Dairy, but once again, something in the cosmos canceled my plans. About 4 miles into the ride, I was just about to enter the backdoor path onto Kaye Paul when a root monster came off the trail, reached up, and slammed my rear derailleur into my spokes. Dead stop, still pretty much dark. Sweat dripping, I was able to pull it from the spokes and barely bend it back to functionality. I limped it on toward the trailhead where I was meeting a friend Bob for a lap. With some poking, prodding, bending and testing, I realized my day on the bike was done. I borrowed Bob’s phone, called home, and Jen and the boys came to the rescue.

Trying to stay positive, I readied myself for work, dropped my bike and a spare derailleur off at the bike shop, and went ahead with my day. After my work duties were ending, I stopped by the pool to check on the swim team’s schedule, and to my surprise, there was no Wednesday practice. I finished for the day and hit the pool for a solid 30+minute swim. It was a non-stop swim that started slow and progressed to intervals, which was a surprise. The day was now  not so bleak. My bike was out of commission, but my elbow was again pool-functional.
Note: I got the bike back on Friday. I had to replace the derailleur hanger and use my older XTR hanger, as the newer XT is bent. My patchwork bike rolls on…

Thursday, 31 Jan.
I woke early again and hit Martin’s Dairy for another predawn run. This time I wore my Zoot minimal tri shoes and was able to increase pace considerably. They still aren’t much shoe, but at least they have a little cushion.

It was a weird, cloudy morning, so the light was very low and the humidity/fog was laying down on the trails and creek. I skipped the Left Trail and instead ran out to Sunset Bluff and around with an extra Kaye Paul. I timed approximately (I don’t have a watch) 51 minutes at about 6.5 miles. That is just sub-8 min/mile, which is where I want to be right now. The X-Terra in Miami finishes with a 5-mile run, so that is the distance I’m training for – just have to work on speed.

Friday, 1 Feb.
Fun Friday Bike Jam with the Bob and Christian at Chuck Lennon in DeLeon Springs. It is a perfect part of training to have days like this. We rode hard and had a blast. The whole county and surrounding areas have been super dry and the trails at Chuck Lennon handle such conditions the best. I got in about 17 miles at around 1:40. Felt good. Bike worked. Good beers for post-ride relaxation. Forgot I had the camera though, so I didn’t get any shots. Hopefully, I’ll remember for next time.

Saturday, 2 Feb.
I took the day off to rest for a big ride on Sunday at Santos. I had a long slow morning ride with Lily and a couple laps at my Mom’s with Shael in the evening. Good ways to stretch out the legs and prevent stiffness. I find I need to have some light easy zone stuff on my days off. I feel it is better for recovery than the couch, mentally and physically.

Sunday, 3 Feb.
Super Sunday at Santos
I was luckily enough to be included in an annual partaking at Santos in Ocala for their Super Bowl ride. They is a large group brought together by mountain bikes and organized by Champion Cycling out of Jacksonville. I’m not sure how many showed, but I’d estimate around 50. Casey came down from Alabama for other reasons, but timed it for the ride, and Jeff and Danny, from the crew I met at San Felasco, made it as well. The gathering broke out into groups, of course. One main group hit the IMBA Epic trail, and the group I went with headed toward the red areas and to the Vortex.

I rode with the group for, I think, about 15 miles. We hit some of my favorite areas, and the pace was quick, though, since there are obvious varying degrees of speed and ability in such a group, we did a lot of stopping and waiting. 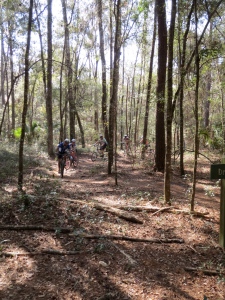 Here is part of the group coming through the woods.

For most of the crew, it was both a ride day and a social day. After a quick stop for some food at the trailhead, we headed back out for a short ride before everyone stopped for an extended lunch. We went through some fun sections of Dr. Ruth and Sinkhole, and at that point, the group headed off for food and socializing. That’s when I broke from the group and really hit up some hard training, as I wanted to get in a lot more riding and did not want to be in Ocala for the whole of my Sunday (though I was certainly not interested in getting home for the Superbowl – something I haven’t watched in over a decade).

Here is Jeff, as animated as ever, giving some direction.

We stopped at a major intersection of trail, which gave me time to get out my map and find my sense of direction. I ate an apple, starred at the map, and talked with Jeff about my best options. Once the group left, I stomped the pedals and headed to Cowbone on my way to the Magic Mountain area. Here is my route (I can’t wait to do it again): Cowbone>Magic Mountain>Rattlesnake Ridge>Anthill>John Brown.

Here’s a self-portrait just before I sucked down a Vega gel and hammered my way back through the red trails.

I stopped for a photo opt and the did the run in reverse order, a novelty at Santos. Once I finished with this run, I stopped to do a bit of way finding and thinking and quickly started back toward Vortex only to stop dead, look at the time and decide it was time to head back for some Sunday family time. I hopped Cowbone>Sinkhole>Marshmallow and finished the day with a good ten laps on the pump track. Total time: 2:40
Total miles: 25

I felt great and could have done plenty more. I rode through all my favorites, though I would have liked another lap on Vortex, and nailed my nutrition. Eat, eat, eat, drink, drink, drink. I run mainly on plant-based nutrition (I have an occasional egg and piece of fish). On the way I ate a bowl of apple cinnamon oatmeal with hemp, chia and walnuts; beans and rice before the initial outing; a nut and dried fruit bar; beans and rice during the short break; an apple as the group left; and a gel between the reverse order red runs. After, I wasn’t starving, which means I’m starting to really figure things out. A bonk-free day is a good day.